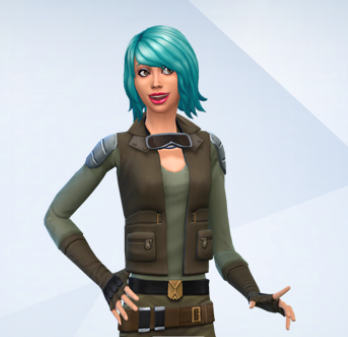 Hi! This is Sparklyjemz, the teenage fan of Plague Master: Sanctuary Dome giving you my view on the characters by making SIMS characters that looks like and have traits like in the book. I couldn’t find a favorite quote this time, but I did change into some zombie-fighting gear! This may have something to do with his character… but I’ll never tell! Ha!

Howard seems like a great guy. If you ask me, the guy on the cover of the book? That’s not Trevor. Nope. The guy on that cover is way too refined whereas Trevor can’t afford that kind of look. He would be dirty, ripped jeans, with messy hair. The guy on the cover is none other than Howard landing inside the dome  on the landing platform looking back at the camera. He knows how dangerous it is for him to get this story for The Public Mirror (a news channel). He’s a reporter, so he wears a grim expression.

I am rocking this zombie fighter look!

Traits: Good, because he’s trying to expose Julius, although he exposes someone worse… Outgoing, because he is one charismatic guy! And cheerful because he jokes with his sister.

Job: He works for The Public Mirror (news channel) as a reporter. It makes sense with his charismatic personality and good looks.

Clothes: I choose the slick hair because it’s black like Samantha’s, and is camera ready. Actually, the reason I picked all his clothes were because they looked like the kind of thing a reporter would wear.

Family: His sister Samantha, Samantha’s kids the twins, (he sends money that he makes with his job to them since it’s hard for Samantha to help them) and his mother, who takes care of the kids since Samantha can’t. (YAY!!! A not-dead mother!!!)

The Interesting Stuff: Poor guy. His family seems kinda messed up. I wish I could talk more about him, he is super important, but I can’t! It’s so unfair! All I can say is that things don’t work out for Howard…

One thought on “Sparklyjemz Corner: Howard”